Ever walk into a room and then completely forget why you did? I hate to admit it but it’s happening to me more and more all the time.  (And I bet I’m not the only one who, when it happens, wonders “is this how Alzheimer’s starts???”) The good news is it’s probably more likely the case that I, just like most people, simply have too much on my monkey mind (but hold that thought…I’ll get back to it I promise!)

I recently became aware of a book by Dr Dale Bredesen called The End of Alzheimer's: The First Program to Prevent and Reverse Cognitive Decline and in the Functional Medicine world it’s being touted as the gold standard re causes of and best treatments for this horrible AND COMMON disease. Indeed, if current studies and forecasts hold true, of the 325 million Americans alive today Alzheimer’s will take the lives of 45 million. To make matters worse, of the top 15 most common causes of death in this country, Alzheimer’s is THE ONLY ONE for which there is literally no effective drug therapy…we don't even have an approved treatment protocol for subjective cognitive impairment or mild cognitive impairment (two conditions that often precede Alzheimer's disease and which typically develop into full-blown Alzheimer's.) And IMHO the most heartbreaking facet of this condition is the way Alzheimer’s literally steals the lives of both victims and their caregivers sometimes decades before it actually causes the victim’s death.

Am I scaring you yet? But wait, it gets worse.

Although we're not even close to a pharmaceutical cure, in the last few years we’ve at least identified a gene variant called ApoE4 and people who’ve inherited this variant from one parent have a 30% increased risk of developing the disease while people carrying two copies (ie they’ve inherited the variant from both parents) have a 50-90% higher risk (compared to only a 9% risk of developing the disease for people who don’t carry this particular allele.) But here’s the real kicker: the vast majority of ApoE4 carriers don't have a clue their DNA is about to give them up until after the onset of symptoms causes them to undergo genetic testing and by then the disease is already progressing.

Personally I’M PETRIFIED of Alzheimer’s…my maternal grandmother suffered from some type of cognitive impairment (at the time we didn’t have all these snazzy diagnoses) and it was absolutely heartbreaking to watch her slow decline. I also trained a client for many years with Lewy Body Disease (which is most easily described as sort of a subset of Parkinson’s) who eventually died primarily from the ensuing dementia…I still keep in touch with his widow Elaine and she often says that the ESSENTIAL Miles (her husband & my client) died about 10 years before his body figured out he was gone.

In all of this grim talk, however, there is some good news: according to Dr Bredesen, Alzheimer’s, as well as all kinds of cognitive impairment, can be prevented (EVEN IF YOU’RE AN APOE4 DOUBLE VARIANT CARRIER!!!) And he can back up that statement with decades of research plus reams of peer-reviewed studies published in all the leading medical journals.

But at least those of you who follow me faithfully shouldn’t have been surprised by that last bold statement…haven’t you heard me say about 100 times before that lifestyle always trumps genetics? And you’ve all also heard me talking about the work of Dr Michael Greger, especially his book How Not to Die, in which he states that ALL FIFTEEN of the leading causes of death in this county (including Alzheimer’s) can be prevented and in many cases even reversed with healthy lifestyle interventions, right?

So now I bet most of you are either feeling completely incredulous or extremely curious…no matter which camp you’re in, however, I have two INCREDIBLY valuable events coming up re protecting and maintaining brain health you won't want to miss.

The first is a new series of T’ai Chi Chih classes. “And what is T’ai Chi Chih exactly?” some of you (who don’t know me very well) may be wondering? Simply put, it’s a moving meditation based on the ancient Chinese principles of activation, balancing, and circulation your vital energy (or Chi) yet it’s both fun and, most importantly, EASY!

And now I can practically hear many of you thinking “Vital force??? Chi??? That sounds COMPLETELY woo woo!!!”

Then think again, my friends…these days the documented benefits of practicing meditation on a regular basis are almost too numerous to mention! But here are a couple of particularly pertinent benefits: Dr Richard Davidson along with several well-known Neuroscientists have performed several long-term experiments at both Stanford and the University of Wisconsin revealing that meditation on a daily basis not only “trains” the practitioner’s wellbeing (just like learning a simple new skill) but also increases neuroplasticity AT ANY AGE…in other words, even during stages of life when the human brain typically begins to atrophy, people who meditate regularly are actually GROWING new brain tissue!

(And I just can’t resist throwing this little tidbit in as well: T'ai Chi Chih not only offers all the neurological benefits of meditation, it’s also been endorsed by the Arthritis Foundation, the American Medical Association, the Mayo Clinic, along with several other extremely well-respected medical authorities as a viable treatment option for a long list of really nasty conditions!)

Oh and remember what I said way back at the beginning of this blog about my monkey mind? I promised I’d get back to that so here's a few more monkey-mind related benefits of regular T'ai Chi Chih practice.

But first let me back up and tell you that, truth be told, I bet the little guy in my head is even MORE chattery than most people’s.

"Say what?" you're probably thinking…"but you're a meditation INSTRUCTOR for Pete's sake! I thought meditation is supposed to be good for quieting the mind!"

Well, at least for me, that hasn't EXACTLY been the case. Again, if I were to be honest, I'd have to admit that little voice in my head almost NEVER shuts up (sometimes I even have thoughts about my thoughts…has that ever happened to you? I know, right?!)

Here’s what I suspect is going on up there: I'm a solopreneur so with the exception of a little bit of help I get with both my social media and website everything else I've been up to for the last 15 years has been resting completely on my shoulders. In addition to working one-on-one with my Sculpt Your Life clients (which sometimes requires a great deal of driving from place to place) and teaching classes, plus working part-time as the Lifestyle Coach at one of Delaware’s only Functional Medicine practitioner’s office, I’m also always quite busy keeping my certifications up-to-date and doing continuing ed. And here's where that little voice actually comes in handy sometimes: IN BETWEEN all of the above I'm also constantly writing content for blogs, press releases, posts across all the different social media networks, and my website (plus in the back of my mind I'm also constantly brainstorming on ways to cause a global shift in the way we all define the words "health" and "wellness"…NO WONDER THE VOICE IN MY HEAD ALMOST NEVER SHUTS UP, right?)

All that being said, it's also true that over time my personal meditation practice has also revealed to me that I'm SOOOOOOOOOOO much more than the voice in my head, my feelings, and my experiences. Here’s why I know irrefutably my last statement is true: if I were to accidentally drop a kettlebell on my head and got total amnesia I wouldn't cease to exist, right? At essence we are ALL like the ocean, deep down under the surface where, no matter what's going on topside, it's utterly quiet and calm. Sadly, though, most of us walk around most of the time feeling and acting as if we're being whipped around by a Class-5 hurricane. But remember the ocean is still just the ocean…droplet or wave, hurricane or quiet depths, it's all the same water, right?

So where am I going with all this?

Here's the bottom line: regular meditative practice is simply a little trick enabling you to remember you don't have to walk around in the middle of a Class-5 five hurricane 24/7… in other words you have no control the circumstances of your life but you have 100% control over your reactions to the circumstances of your life! Even better, when I say "regular meditative practice" what I actually mean is only 15-30 minutes a day (and that’s not much of a commitment in order to potentially experience PROFOUND shifts in overall health plus the ways you feel, think, and act!) And remember T'ai Chi Chih is often experienced as the easiest and most fun meditative practice of all…BONUS!!!

But don't just take it from me…I guarantee you that ALL of my students would undoubtedly testify T'ai Chi Chih is a HUGE bang for the buck!

Just for argument's sake, though, let's say you still don't buy it that a regular meditative practice could potentially ward off Alzheimer's (or cancer or any other really awful disease.) Or perhaps you have indeed been practicing meditation regularly for many years but you also smoked for many years when you were young or maybe you simply live in a hotspot and unfortunately you eventually get cancer anyway. I think we can all still agree that having a tool in your toolbox enabling you to tap easily into a little serenity at any time will certainly help you travel lighter through what might otherwise feel like some of the darkest days of your life.

Still have questions about all this not-necessarily-just-woo-woo stuff? Then click here to watch a couple of short videos and all will become clear. But if you’d still feel more comfortable with a more western medical approach to this incredibly important topic of Alzheimer's prevention then you definitely don’t want to miss another upcoming event: my part-time boss, Dr Tamara Blossic and I have teamed up once again to create a brand new workshop “MISSING PIECES: Maintaining Brain Health.” This lively discussion will be packed with tips on all the best ways to protect and maintain brain function including:

Dr Blossic and I are both thoroughly versed in all the latest research (but of course we’ll also be touching on the importance of regular meditation & relaxation too…remember this stuff is considered HARD SCIENCE now!) All you’ll need is a pen, a notepad, and an open mind…pardon the pun folks but signing up for this workshop is a SERIOUS no-brainer!

That’s just about all I’ve got for now…hopefully this blog really has you thinking about all the ways I can help you become 100% empowered to keep your brain (and frankly, the entire rest of your body) healthy and strong for the rest of your life. So the best next steps you should take are:

And BTW even if you do indeed take my T'ai Chi Chih class (and, like most of my students, enjoy it so much you become a very dedicated practitioner) you might still occasionally walk into a room then suddenly forget why you did (just like MOST people over the age of 40 LOL!) But at least you'll know a lot more about how to give your monkey mind a banana anytime you want. 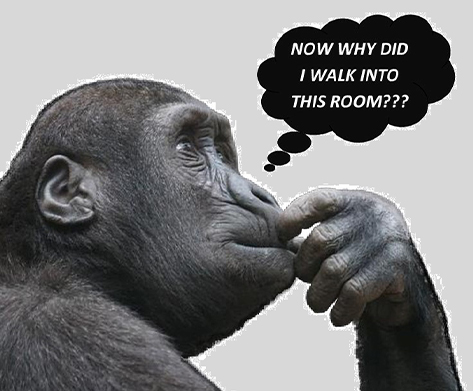