THE DIRTY DOZEN (and I don’t mean cowboys, gunfights, or anything related to Clint Eastwood!)

First I want to talk about GMOs (or “genetically modified organisms.”) In layman’s terms, GMOs are plants that have been artificially manipulated by a scientist in a lab. GMOs were created so that various plants could withstand drought, pests, and direct application of herbicide. Let’s face it…food manufacturing in this county is a huge business and making sure the crops required to make all those yummy processed snacks survive is simply part of the big picture!

The problem is that this experimental technology mechanically merges DNA from different species, creating unstable combinations of plant, animal, bacterial, and viral genes that simply cannot occur in nature or through traditional crossbreeding. Not surprisingly, a growing body of evidence connects GMOs with health problems, environmental damage, and violation of farmers’ and consumers’ rights.

Obviously, then, the million dollar question is “are GMOs safe?” Most developed nations do not consider GMOs to be safe. In more than 60 countries around the world, including Australia, Japan, and all of the countries in the European Union, there are significant restrictions or outright bans on the production and sale of GMOs. In this country, however, the government has approved GMOs based on studies conducted by the same corporations that created them and profit from their sale.

What’s worse, one of the reasons why GMOs are permitted in this country is because they’re currently lumped into a category called “Generally Recognized as Safe” (or GRAS.) The “GRAS” label allows foods to enter and remain in the food system through a streamlined process in which food manufacturers, rather than government agencies, are responsible for determining their products’ safety (in other words no government agency has to sign off on the safety of anything carrying the GRAS label.) You might also be curious to know that currently there are 3 other cloaked-in-controversy-categories of foods bearing the GRAS label: transfats, salt, and sweeteners (including sugar, all its derivatives, and various artificial sweeteners.) I’m sure you get where I’m going with this…you certainly don’t have to be a Nutritional Counselor to be aware of all the evidence linking transfats, sweeteners, and salt with various human health conditions and diseases.

The bottom line is that there have been NO double blind long-term studies conducted on the safety of genetically engineered foods when consumed by humans. Thank goodness increasing numbers of Americans are taking matters into their own hands and choosing to opt out of the GMO “experiment.”

So if you’re suddenly concerned about the possibility GMOs are hiding in your pantry, here’s a list from GMO Free PA of foods (and in some cases their derivatives) that are most likely to be genetically engineered (or “GE” for short):

And now that you’re an expert on GMOs (and will avoid them like the plague from this day forward, right???) I’m sure you’re wondering what the heck you can eat (safely, that is!)

I HAVE GOOD NEWS! Every major world health organization (including THE World Health organization and even the USDA) agrees we should be eating 9-13 servings of fresh whole vegetables and fruit every day. (And again you don’t have to be a Nutritional Counselor to know that you’re always better off eating whole veggies and fruit than processed foods of any kind, right?)

And, again, because you’re now an expert on GMOs I’m sure it also seems clear that when buying fresh produce your safest bet is to buy organic whenever possible. Not only will that reduce your exposure to organisms which simply can't occur in nature but you’ll also be reducing your exposure to pesticides as well as sending a message that you support environmentally friendly farming practices which minimize soil erosion, safeguard workers, and protect water quality and wildlife.

BUT, sadly, organic produce simply isn’t accessible or affordable for everyone…

Enter the Environmental Working Group: a consumer watchdog organization that’s been fighting for consumers' rights to live healthier lives in a healthier environment since 1993. In 2004, the EWG created their Shopper's Guide to Pesticides in Produce™ (also known as The Dirty Dozen) which ranks the pesticide contamination in 48 of the most popular veggies and fruits. The guide is based on the results of more than 35,000 samples of tested produce and helps smart shoppers make smart choices when buying organic produce 100% of the time isn’t possible…by paying attention to the Dirty Dozen shoppers can at least reduce their exposures to toxic pesticides dramatically!

And why should you be concerned about pesticides? Because they’re toxic by design, created expressly to kill living organisms like insects, plants, and fungi that are considered "pests." Independent scientists and doctors all over the world confirm that many pesticides pose health hazards including:

So here’s the current list of the 12 worst offenders as well as the Clean Fifteen vegetables and fruits that contain the least pesticide residue (so if budget or availability is an obstacle to buying organic 100% of the time, buying conventionally grown varieties of these veggies and fruits is always a safer bet in the long run than eating a diet composed primarily of processed food!)

Then don’t miss my next Smoothie 101…you’ll sample lots of yummy smoothies while learning more about:

· The value of blending vs juicing

· Which blenders are best?

· Which veggies and fruits taste best together and why?

· And even tricks for keeping veggies fresh for days in your fridge (including AVOCADOS...now THAT'S a toughie!!!) 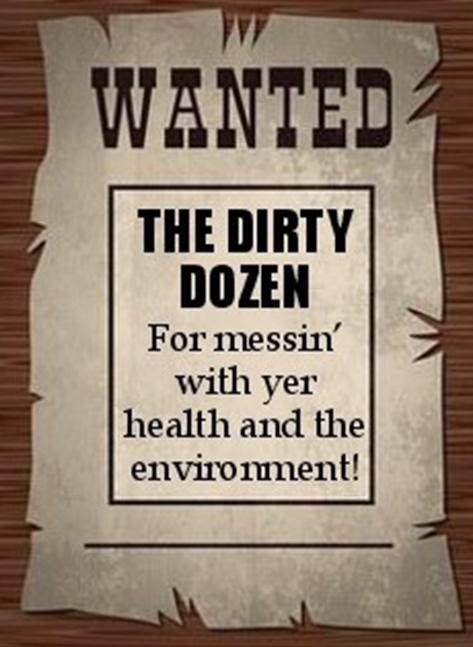